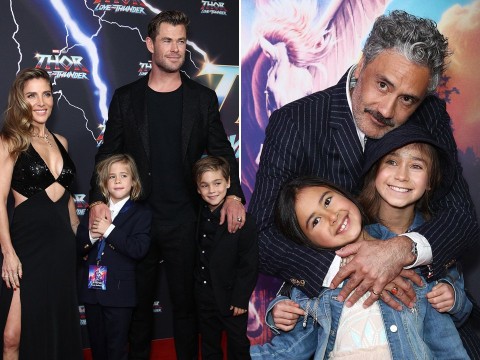 The highly-anticipated new Marvel movie Thor: Love and Thunder is only days away from being released in cinemas.

What We Did in The Shadows creator Taika Waititi returns to direct what is sure to be a hilarious, action-packed space adventure and there are some very recognisable new faces.

There’s a whole host of new cast members, including Russell Crowe and Christian Bale alongside the Thor: Ragnarok ensemble, as well as the children of Waititi and Bale, and also leading stars Chris Hemsworth and Natalie Portman.

Hemsworth revealed that all three of his children appear in the movie with his eight-year-old twins playing the younger version of his own character, Thor.

In an interview with Kevin McCarthy, he revealed that several of the lead stars’ children also feature in the movie.

‘It’s really cool, they really wanted to be in it,’ Hemsworth said about his kids’ involvement in the film, before he revealed it was a family affair for several actors.

‘Taika had his children in there. Christian Bale had his. Natalie had her kids as well. That’s my daughter as well,’ he continued.

Hemsworth added: ‘It felt like a one-off fun family experience.’

Despite all the Hollywood offspring making their on-screen debuts in a big-budget Marvel movie, Hemsworth admitted it might be a one-time experience.

‘I don’t want them to go off and now be child stars and actors,’ he explained. ‘It was just a special experience we all had and they loved it. They had a great time.’

The Dark Knight actor Bale, who is joining the franchise as the terrifying villain Gorr the God Butcher, admitted that he took the role after his children’s encouragement.

Bale spoke to Screen Rant about how his kids convinced him to star in the epic film, before they joined their dad in the movie too.

He revealed: ‘There were some potential scheduling conflicts. I said to my family, ‘I don’t think it’s going to work out,’ and they went, ‘No, you make it work out. You’re doing this, Dad.’ They gave me my marching orders, and I dutifully obeyed.’

Thor: Love and Thunder lands in cinemas on Friday 8 July.

How Jane Foster becomes Mighty Thor in the comics and why she wasn’t in Thor: Ragnarok