The ‘Level Up’ edition of the reality TV show unveiled the 24 housemates of the season who would battle for the N100 million grand prize.

Taking to the microblogging platform Twitter, Cuppy shared a photo of Groovy saying that she and the housemates are twins.

Groovy shares some similarities with Cuppy. Apart from having a light complexion, the housemate used Cuppy’s favourite colour for his hair.

“Pretty sure Groovy and I are twins” 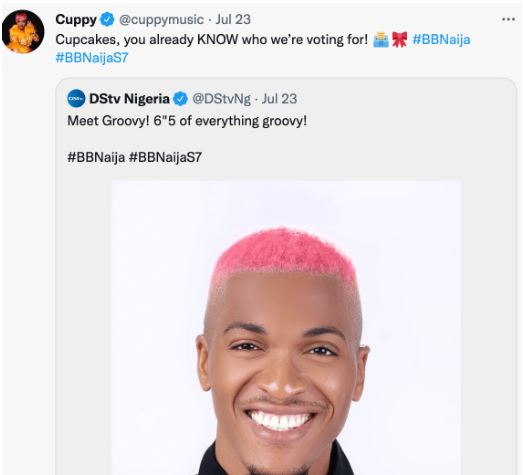 Recall that the show host Ebuka Obi-Uchendu recently reacted to the speculations that Groovy has bad breath.

Groovy became a topic of discussion online after a gesture from Ebuka which seemingly suggested that he was wading off bad breath from him.

Putting an end to the speculations, Ebuka in a post shared on Twitter said he was only scratching his nose and people should allow Groovy to rest.

Freed Kaduna train attack victim: “FG Failed To Rescue Us I Feel Bad For Those Still In Detention”