Sigourney Weaver, 72, to play teenager in Avatar 2 – and hung out with teen girls to prepare for role 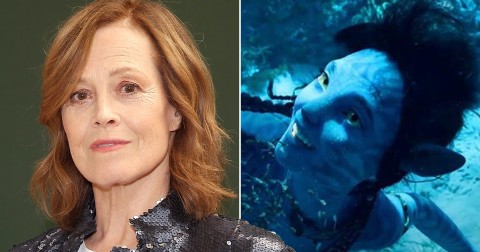 Sigourney Weaver is about to take on a role no one would have expected, as she’s set to star as a Na’avi teenager in the second Avatar film, The Way Of Water.

The 72-year-old will play an adoptive child of Jake (Sam Worthington) and Neytiri (Zoe Saldana) in James Cameron’s long-awaited sequel.

It’s definitely not a typical role for the Alien actress, with director James admitting it’s a ‘big acting challenge’.

‘We’re gonna have a 60-something actor playing a character [decades younger than] her actual biological age,’ he explained. ‘Sig thought it was all kinds of fun.’

‘I think we all pretty much remember what we were feeling as adolescents,’ she added to Empire. ‘I certainly do. I was 5’ 10” or 5’ 11” when I was 11. I felt strongly that Kiri would feel awkward a lot of the time. She’s searching for who she is. I was thrilled to be given that challenge by Jim.’

To prepare for the role, Sigourney, who’s also known for films including Ghostbusters and Gorillas in the Mist, jumped straight into workshopping and hung out with a bunch of teenage girls.

She was ‘thrilled’ to take on the challenge.

‘There was lots of eye-rolling, which I know well from my own girls when they were teenagers, completely psychotic’ she recalled.

James said it was a huge success, with Sigourney even looking younger and having more energy. He added that she had a ‘lightness in her step and a fun spirit’.

Joining Zoe, Sam, and Sigourney on the cast are the likes of Kate Winslet, Vin Diesel, and Michelle Yeoh, with the actors having to go out of their comfort zone for underwater scenes.

Kate plays the role of water character Ronal, which required her to learn to free dive.

American actress Sigourney Weaver on the set of the film Aliens.

In fact, Kate got so good at holding her breath underwater she beat Tom Cruise’s record and was one time submerged for seven minutes and 14 seconds.

Trying to describe what it’s like, Kate said it feels ‘just wonderful’, but did confess that when she resurfaced, she was convinced she had died.

‘God, it’s just wonderful. Your mind completely drifts off. You can’t think about anything, you can’t make lists in your head, you’re just looking at the bubbles underneath you,’ she told Observer magazine.

Avatar 2 is scheduled for release this year, with the third, fourth and fifth films planned for December 2024, December 2026, and December 2028.