A former President of the Performing Musicians Association of Nigeria (PMAN), Tee Mac, has revealed the alleged age of the presidential candidate of the All Progressives Congress (APC), Bola Tinubu.

Tee Mac claimed that Tinubu is 86 years old as he warned Nigerians against votting for the former governor of Lagos State in 2023.

According to the renowned flutist who said Tinubu is his in-law, the APC presidential candidate is not fit to rule Nigeria.

He condemned Tinubu for not revealing his real age, source of wealth and background despite his agenda to rule Nigeria.

Tee Mac stated this while reacting to a Facebook post by one Yemi Olakitan, who declared support for Tinubu.

War of words as Peter Obi backers are mocked by Governor…

He further stated that he stopped visiting Tinubu when he sold Muhammadu Buhari to Nigerians in 2015. 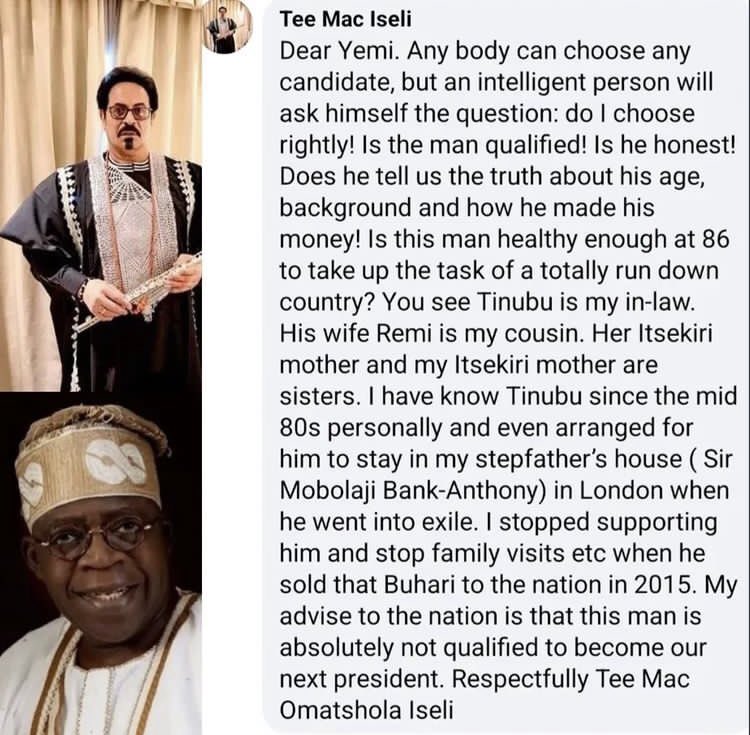 13 New Cases Of Lassa Fever Are Confirmed By NCDC

What I Ordered Vs. What I Got: A Heartbreaking Experience by Uche Ogbodo

The IGP mandates impenetrable security around schools and hospitals

442 parcels of crystal methamphetamine are seized by NDLEA…

Festus Keyamo Minister: “No Law Prevents Me From Being…